Tel Zion was established in 1990 by a Viznitz entrepreneur, Mr Amsel, realizing that there was no Charedi yishuv he approached government bodies and applied for a grant to form one. Rabbi Kosover was chosen as the the Mara D'asra and a mainly Chasidish kehilla was built. Following an internal rift Mr Amsel was forced to leave the town and building was frozen as he held exclusive building rights. Due to lack of growth the Chasidish community dwindled, and when the permits expired, a group of sephardim saw the potential and marketed apartments to the sephardic community. Until around 2017 the town was predominantly sefardi, however Rabbi Shalom Koledetzki, seeing the potential for cheaper housing for yungerlite, marketed 400 units to kollel bney torah, shifting the dynamic to a more balanced community, with the Ashkenazim equaling nearer to half of the town's population.

Currently the town boast roughly 1000 families, around 400 Ashkenazi families and 600 Sefardi. There is also a small Cabad community of around 50 families.

There Is one Ashkenazi Mora Deasra, Rabbi Avraham Goldberg, alumnus of Ateres, and Mot"z on the Ahavat Shalom Beis Din.

The Ashkenazi Community boasts 2 shuls, both under the autospies of Rabbi Goldberg, Avi Ezri and Chanichei HAyeshivos, both are of similar nature, but each mainly serves their local area.

There are around 11 Sefardi Shuls each with their unique flavor.

There is 2 Chassidish Shtiblach, one serving as the minyan factory during the week for the whole community, and the other only has minyanim on shabbos. 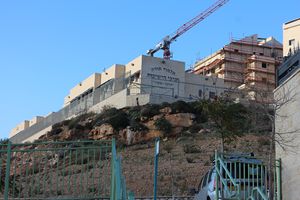 There is a 2 boy youth programs, one litvish and one sefardi.

Situated in the mountains around Yerushalayim, the Gesher Hameitarim and the rest of the Jerusalem skyline is clearly visible, including belz.

It can get quite windy in the winter, but in the summer the breeze is greatly appreciated; there is little humidity. 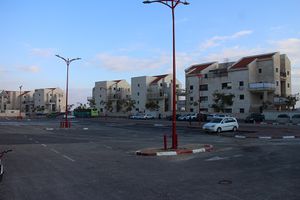 Transportation the Yerushalayim is serviced by multiple routes

143/144 travel via Kochav Yaakov, and end in Yerushalayim by Levi Eshkol.

145 travels direct to gesher mitarim via Tzomet Ramot. 345 is the same as 145 but goes via Kochav Yaakov.

The price when paid by cash is 3 shekel, alternatively can be paid via Rav kav - same fare as yerushalayim including ma'avar etc.

There is one local makolet, [Shefa Birkat Hashem] a Yenot Bitan in neighboring Kochav Yaakov, a short but ride away in Shaar Binyamin there is 2 Supermarkets, Rami Levi and Maayan2000.

There is a Tambur in Kochav Yaakov, and many home stores, from clothing to diapers.

Mishnat Yosef [a communal Mechira with competitive prices] sports 2 locations, with the sale every Monday night.

There is a Meuhedet, Tipat Chalav and pharmacy, Clalit and Leumi also have offices here.

Tel Zion is home to about 1,000 families, with a population of about 6,000 people. The yishuv is currently growing and there are about 400 new housing units under construction. In addition, the management of the yishuv is advancing plans for additional commercial areas and construction. The outline plan for the yishuv has the potential for about 7,000 housing units, and the yishuv and the regional council are working to speed up processes in order to reach this goal.

Tel Zion is an ultra-Orthodox community-style yishuv. This is expressed by the activities that are organized for all of the residents – men, women, teens, and children, special events and various cultural programming. The yishuv is home to various distinct communities, but despite their differences, all of the residents are connected like one, big community.

Public transportation to Tel Zion is one of the most developed in the country, both in terms of the frequency of buses and in the manner that it is conducted.

There are several kollels in the yishuv, with hundreds of avreichim who sit and learn all day long. The schools are the pride of the yishuv, and almost all of them are in permanent buildings. There are currently: 4 Talmudei Torah for boys, a Bais Yaakov for girls, kindergartens, daycares and many private playgroups, a seminar for high school girls, a yeshiva ketana, a yeshiva gedola. There are also 13 synagogues surrounded by cohesive, organized communities.

There are three kupat cholim health clinics, a supermarket, and other stores.

It is noticeable how much the local residents love the yishuv. [from Mate Binyamin Website]