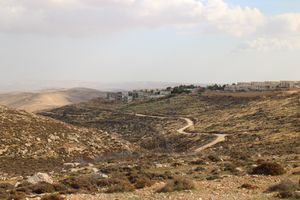 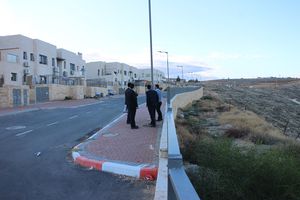 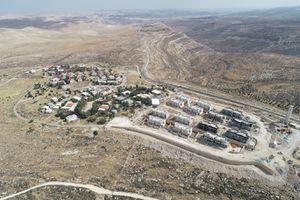 Maleh Amos from on top

Ma'aleh Amos (Hebrew: מַעֲלֵה עָמוֹס, lit Ascent of Amos) is a Chareidi yishuv under the jurisdiction of the Gush Etzion Regional Council.

The yishuv was established in 1981, and was named after the navi Amos, who lived in the village of Tekoa nearby.

There are about 50 veteran families who have been recently joined by another about 50 who moved into newly constructed apartments. From the core group, about a third are English speakers.

Up until recently, most of the residents were immigrants from the United States and Russia. Most of the original core group of the residents identify as Litvish, though there are Chassidim and Sephardim as well. The Chassidim include Amshinov, Breslov, and Boyan, and lately, an large contingent of Biala Chassidim.

There are about 20 families of Biala Chassidim, and the Biala Rebbe has bought an apartment with the intention of settling here. 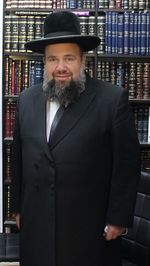 Rav Ze’ev Charlop shlita is rav of the community. A native of New York, Rav Charlap speaks fluent English, though the he delivers his shiurim in Hebrew.

Rav Dovid Steinhaus, a native of England, is the rosh kollel. He has authored numerous seforim in Hebrew and English. 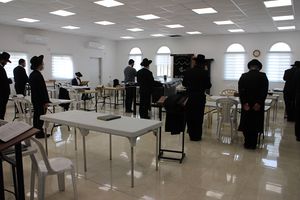 The yishuv boasts two shuls, one Litvish (nusach Ashkenaz) and one Chassidish (Biala).

The Yishuv also has its own mikveh taharah. 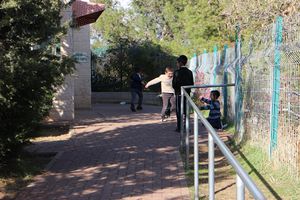 Kids in cheider in Maaleh Amos

There is a local Cheider, elementary Bais Yaakov, pre-schools, a library, shiurim, learning programs for boys, workshops for boys, girls, and women.

There are many organized shiurim for both men and women, in English and in Hebrew. The Rav gives a shiur on the parsha every Thursday. There is a halachah Kollel, as well as Daf Yomi and gemara shiurim.

The local youth are very active and the yishuv organizes many events and functions for them, fostering a warm community atmosphere.

The yishuv also has an active N'shei for women (Noam), with special events every Rosh Chodesh.

Elementary-aged girls participate in the activity of “Bnos” on weekdays and Shabbos, and children bring out their talents in the many chugim (extra curricular classes) available.

About every month an "Oneg Shabbos" is prepared for the yeshivah bochurim.

There is also a gym for kindergarten-age children.

There is a large library which includes Hebrew and English books. The library is open for men and women separately on different days of the week. 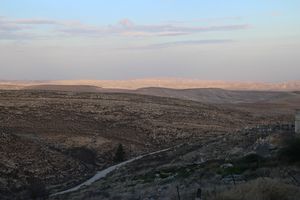 Ma'ale Amos is located on the eastern slopes of the Yehuda Desert, 20 km southeast of Yerushalayim. At an elevation of 725 meters above sea level, it offers a magnificent view overlooking the Judean desert all the way to the Dead Sea.

Ma’aleh Amos has a dry desert climate. Being a mountainous region, there is a steady breeze. 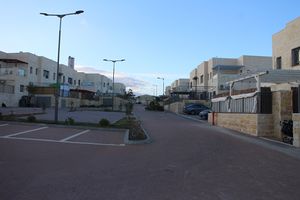 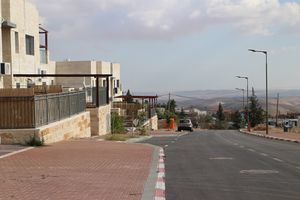 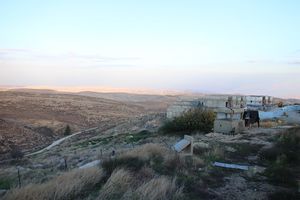 Over the years the town was built with three different housing projects.

The original houses were built completely detached, each with a unique plan, layout and size. The second project was comprised of semi-detached houses with a small yard. The third project, completed in 2002, comprised of concrete units brought over and built from within.

Prices of apartments in the new expanded area start at 790,000 NIS for three rooms (2 bedrooms). A four-room apartment with a garden will cost about 940,000 NIS, and villas and private homes will cost more.

There is also potential to build your own unique house.

Although the town has undergone expansion throughout the years it still managed to maintain its suburban look and sense of community.

The Yishuv is about half an hour drive from southern Yerushalayim (45 minutes to Ramat Eshkol) and 25 minutes from Beitar.

Local residents recommend having a car.

There is a small grocery store on premises with basic necessities and some frozen goods. It is open one hour in the mornings and two hours in the afternoons. Many families order their groceries by delivery from two online vendors - Yashir Lamehadrin and HaMechirah HaKehillatit.

Many of the residents do their shopping at the Gush Etzion shopping center located 14 minutes away.

Standards of Chareidi bnei Torah, including modest dress and behavior, and an aspiration to grow and be part of a community of ovdei HaShem.

Financial stability and a desire to participate and be involved with the community.

There is an acceptance committee. To apply, an application form must be filled. There is then a pre-screening meeting with the town committee, after which the family is invited to spend a Shabbos in the community. It is then decided if they are to be accepted.

There is no Ulpan or other extra resources for immigrants, as there are no immigrants coming directly from abroad. Residents are extremely friendly and helpful, yet they recommend new immigrants start out in a more Americanized setting for a softer landing to avoid the culture shock and other difficulties, such as language or unrealistic expectations. 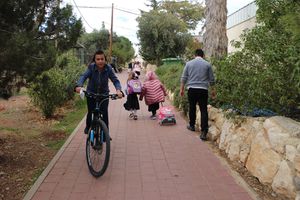