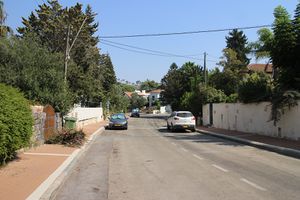 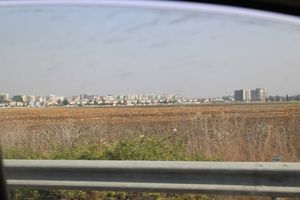 A view of the city of Afula

Giv'at HaMoreh (Hebrew: ####) is a neighborhood of Afula, detached from the main city. It is home to a kehillah of bnei Torah officially called HaKehillah HaToranit Giv'at HaMoreh, commonly known as "The Kehillah."

The Kehillah was established on Rosh Chodesh Elul 5772 (2012) by a core group of ten families of avreichim. Since then there has been steady growth, and as of 2020 there are about 300 families.

The Kehillah was established for the purpose of having more-affordable housing available for young Chareidi couples. 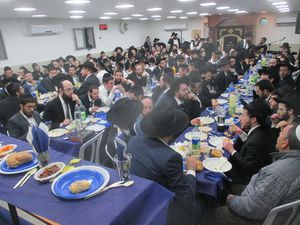 The kehillah celebrting a Chanukas Habayis in the Ohel Moshe shul

The existing population before the coming of the kehillah comprised of several different groups, including mostly-traditional Morrocan Jews, Russians, Ethiopians, and a sprinkling of Arabs or Druze. There was also a small presence of Chareidim.

Though predominantly Litvish, the Kehillah includes different stripes of Chareidi bnei Torah, including a sizeable Sephardic element and several families of Yemenite background.

There is a sizeable number of English speakers in the Kehillah, many of which are originally from out-of-town communities. Some are immigrants themselves, and others are children of immigrants.

The newcomers to the Kehillah are generally young couples, which makes for a very young median age.

Rav Nosson Rotshild shlita is rav of the Kehillah. He had previously been on the staff of Yeshivas Geon Yaakov in Bnei Brak.

Rav Moshe Yehuda Begal zt"l (d. 5776), originally from Manchester, was one of the founders of the Kehillah and its first moreh hora'ah. His father-in-law, Rav Reuven Meir shlita, who had been a rosh yeshivah in France, now lives in the neighborhood. 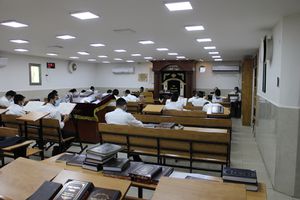 Kollel in the Ohel Moshe shul

There are several shuls that have predated the Kehillah. One is Ashkenazi (nusach Sefard or Chabad), which serves the Ashkenazi non-Yeshivish population and some of the Kehillah members. All the others are nusach Edot Mizrach (Sephardic), and the members scale from traditional to fully observant.

The Kehillah currently has three shuls - one Sefardic and two Ashkenaz. 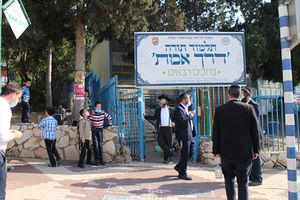 kids waiting to be taken home from cheider

The Kehillah is served by a well-established cheider, Derech Emes, which was founded under the aegis of Rav Aaron Leib Shteinman zt"l. It preceded the Kehillah by several years and serves Chareidim living in a wide geographical area who are interested in a solid Chareidi chinuch. The cheider follows the "Zichru" method, and has several hundred talmidim.

The Kehillah has opened a local yeshivah ketanah, which includes all 3 shiurim. There is a yeshivah gedolah in nearby Afula Illit, and many of the staff members there are members of the Kehillah.

A Beis Yaakov school was established together with the Kehillah, and includes all elementary grades. For Beis Yaakov highschool, some residents commute to Tzefas where there is a branch of the "Snif" Beis Yaakov of Yerushalayim, and others attend the schools in Rechasim, both about an hour away. There is talk about opening a local Beis Yaakov high school.

There is a N'shei group for English-speaking women of the Kehillah. 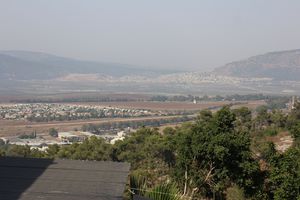 The neighborhood is located on the slopes of a hill of the same name overlooking Emek Yizre'el (Jezreel Valley) from the northeast.

The "city," the central part of Afula, is about a ten-minute drive down into the valley. 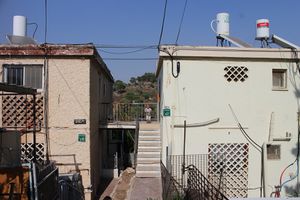 Old but very affordable semi-private apartments where many avreichim live. 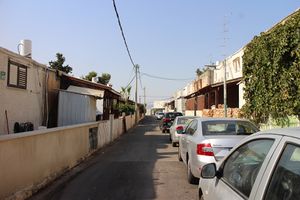 The Kehillah keeps tabs on the real-estate prices by having all purchases and rentals done through or with the approval of the Kehillah's housing committee (Va'adat Diyur). They are very very strict about this, which has proven to prevent unrestrained increase in prices, by preventing competition between potential buyers and keeping the demand to the level of supply.

Membership in the Kehillah, inluding use of services and educational institutions, is contingent on adherence to this rule.

Most members of the Kehillah own their homes.

There is a new housing project of about 300 units marketed exclusively to the Kehillah, which will make for an all-Chareidi enclave at the entrance to the neighborhood. The prices start at 726K NIS for 3-room (2-bedroom) apartment, 790K NIS for 4 rooms, and 850K NIS for 5 rooms. Construction is slated to be completed by 2024. There are several Anglos who are buying apartments in this project. 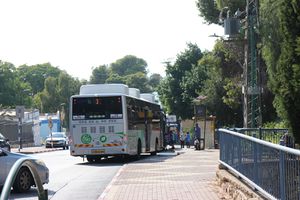 Kids getting on the bus after cheider

The neighborhood is about a ten-minute car ride or twenty-minute bus ride from the Afula Central Bus Station, from where there is regular transportation to destinations all around the country, including to and from Yerushalayim about every hour of the day (Egged #953).

There is also a bus stop at the foot of the neighborhood where some buses to and from Yerushalayim have stops, including one originating in Teveria (Egged #959) and another predominantly serving Chareidim (Netiv Express #982).

The new train station in Afula connects to Bet She'an and to Haifa, and from there connects to trains going to many destinations.

Though most Kehillah men are in kollel, working is not frowned upon. Some are rebbeim, sofrim, and mashgichei kashrus.

Women are employed in teaching positions, office work, as medical secretaries (also in the nearby Emek hospital) and more. One of the women in the Kehillah is tasked with job placement for Kehillah women who are interested.

There are a several small grocery stores in the neighborhood, as well as a medium-sized supermarket. There are several supermarkets down in the "city," a ten-minute drive away.

Inside the neighborhood there is a branch of the Mishnat Yosef weekly sale, as well as a low-cost sale of basic goods arranged by the Kehillah.

The Emek hospital, serving the whole region, is walking distance from the neighborhood and within the eiruv connecting Giv'at HaMoreh to Afula Illit.

The neighborhood includes a Clalit medical clinic, and in response to growing demand from the Kehillah, a branch of Meuhedet was opened as well.

Women may drive only with express allowance by Kehillah rabbonim, but in general frowned upon.

Integration into the Kehillah, including use of services and educational institutions, involves getting approved by acceptance committee (Va'adat Kabalah).

Community of patriotic avreichim in the serene & scenic north with affordable housing.